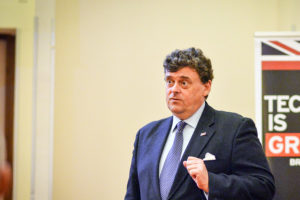 Neil McGregor represented McGregor & Partners at GREAT Low Carbon Business Exchange, an event organised in Bucharest by the British Embassy and by the United Kingdom’s Trade & Investment organisation in central and eastern Europe.

Many of the companies taking part were new to the region and Neil gave a presentation to them about the realities of doing business in Romania and Bulgaria.  The participants were explained that, even if Romania, Bulgaria and the UK are members of the EU, the Romanian and Bulgarian legal environments differ from that in the UK in several important respects, including in the energy area.

Neil outlined the different support schemes for renewable energy which exist in Romania and in Bulgaria and also the changes which have been made to them. Despite the difficulties which have been raised by these changes for wind and photovoltaic energy schemes, participants in the Low Carbon Business Exchange showed much interest in the possibilities offered by other technologies and in the grid system.

Some of the participants were making a second visit to the region, having previously participated in the United Kingdom’s Trade & Investment organisation’s MegaMission in the energy sector earlier in 2013.  It is expected that this sustained interest in opportunities in Romania will lead to new investments being made and Neil was able to give practical advice to British participants on what to expect when coming into Romania and doing business here.