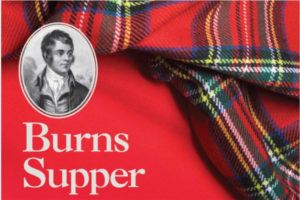 Bucharest, January, 2014. The law firm McGregor & Partners, represented by Neil McGregor, managing partner, took part on Saturday 25 January 2014 to Burns Supper, charitable cultural event organised by the British community of Bucharest. The amount raised at the end of the event, at its eleventh edition, was donated to Light into Europe Foundation, the only organisation from Romania developing programmes to help children sight and hearing impaired.

“I am honoured that, this year too I was invited to be the host of Burns Supper. There are 11 years since this event represents a tribute to the national poet of Scotland, Robert Burns and by raining funds it supports the children and youngsters with hearing and sight difficulties. The poetry of Robert Burns is well known worldwide for the celebration of humanity and it is therefore, as adequate for this event to bear a humanitarian cause. Moreover, Burns Supper constitutes an opportunity for business men from Romania to meet.”, declared Neil McGregor, Managing Partner McGregor & Partners, Founding Member and Master of Ceremony of Burns Supper.

Over 150 representatives of important companies of Romania, members of the British community as well as a series of diplomats present in Romania, have met to support Light into Europe Foundation, and also to spend an authentically Scottish evening.

The tradition of organising Burns Supper, to mark the birth of Robert Burns on 25 January started at the end of the 18-th century and today it is celebrated all around the world by Scottish people and admirers of Robert Burns’ poetry. He was many times compared to Mihai Eminescu, and during events held in Bucharest, both poets’ works were read.

Burns Supper is the second annual event of this kind organised in Bucharest, the first being the Caledonian Ball held each year in November celebrating the day of Saint Andrew. At the last edition of the Caledonian Ball, which was at its 16th anniversary last year, was raised an amount of €25,000, also donated to Light into Europe Foundation.