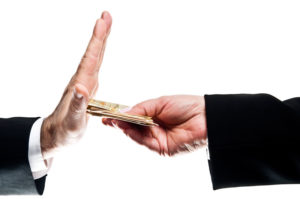 Double standards? The UK gets serious on foreign bribery One of the reasons for the introduction of the UK Bribery Act in 2010 relates to the commercial and business realities, such as UK companies doing business outside UK, either in their name, or through associates and/or holding companies.

As it may be difficult for the UK authorities to prosecute bribery offences which take place outside the UK, the UK Bribery Act introduced the” failure to prevent bribery” principle, on which basis a UK company doing business outside UK – even through a subsidiary, associated or holding company – may be prosecuted in the UK for “failing to prevent bribery”. This was demonstrated by the first reported case of the enforcement of the Bribery Act for foreign corruption at the end of 2015. The same applies to non-UK companies which have business activities in any part of the UK.

“Failure to prevent bribery” is measured by British standards of behaviour, not local customs. For this reason, it is important for UK companies, non-UK companies which do business in the UK and / or their associates to have compliance programmes in place, which comply not only with the UK Bribery Act, but also with the local legal requirements.