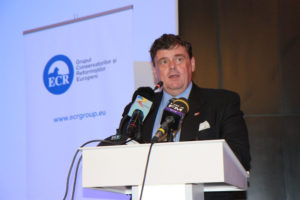 Lessons Learned on the anti-corruption practices

On 20 September British solicitor Neil McGregor, as Managing Partner of McGregor & Partners and as Vice-Chairman of the British Romanian Chamber of Commerce, spoke at the conference “Strengthening Anti-corruption in the Romanian Business Sector – The UK Bribery Act and the US Foreign Corrupt Practices Act: Lessons Learned”. This event was organised in Bucharest by Monica Macovei, Member of the European Parliament, with the support of the British Embassy in Romania, the US Embassy in Romania, and the British Romanian Chamber of Commerce.

The discussions concentrated on the efforts to implement the National Anticorruption Strategy for 2016-2020 (the “NAS”) and to draw particular attention to the problem of corruption in private business, in addition to the public sector. The audience included top management of multinational companies operating in Romania, compliance officers, members of the Romanian government and representatives of civil society organisations.

Although bribery is a criminal offence under Romanian law, Neil explained the standards of behaviour which are required by the UK’s Bribery Act 2010 and how it can apply to what happens outside the UK, including Romania. He also outlined the emphasis placed on prevention of bribery through changing business culture with the criminal offence of “failing to prevent bribery” by someone who is associated with a company, such as employees, agents or advisers. This corporate offence makes the UK’s Bribery Act to be considered to be one of the toughest laws against corruption in the world.

The NAS also emphasises the necessity to create and enforce prevention measures for each institution. Neil explained what effective and practical prevention measures look like and gave examples from recent cases in the UK of where compliance procedures had not been sufficient, including the substantial financial penalties imposed as a result of failing to prevent bribery.

McGregor & Partners have been active in contributing to the public debate on the NAS. We continue to help clients to do business safely in business environments where corruption is an issue, and to assist them in taking action where bribes are asked for or where it is suspected that their competitors may not act as ethically as they do.