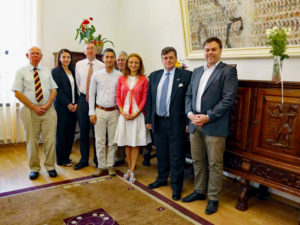 On Friday, 16 September 2016, Neil McGregor, Managing Partner of McGregor & Partner had a meeting with Daniela Cimpean, the President of the General County of Sibiu to talk about how the Sibiu local authorities can help the restoration of the narrow railway gauge from the Hirtibaciului Valley, between Cornatel and Hosman.

The Mocanita’s friends Association and their volunteers, supported by a group of pasionated British volunteers who founded an informal Association in Great Britain – Sibiu Agnita Romanian United Kingdom (SARUK) made possible a narrow gauge steam engine to be able to move on these old rails and help tourists from everywhere to enjoy the stunning landscape of the Hirtibaciului Valley. The President of the Sibiu General Council stated that this is a project and these are people who she is proud to work with to sustain a beautiful project for the Romanian railway industry.

McGregor & Partners is proud to be part of the Mocanita project and we are positive that finally there will be a successful project for the Romanian Railway after 26 years when the industry failed more than it gained.