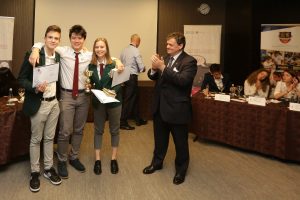 Neil McGregor, Managing Partner of McGregor & Partners and President of the British-Romanian Chamber of Commerce made part of the select jury of the traditional debate contest Sir Winston Churchill “Future Leaders” in which young students from international schools from Romania, but also from Europe are debating important topics of the concrete reality. This year, the team of the British International School of Bucharest (IBSB) went into the finals and won the contest against the team of St. George School of Luxembourg.