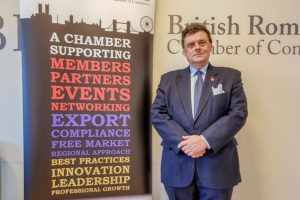 Bucharest, 12 November 2018 – Neil McGregor (managing partner of McGregor & Partners and a director of Purcari Wineries) has succeeded Colin Lovering as Chairman of the British Romanian Chamber of Commerce (BRCC).

Neil, previously one of the Vice-Chairmen of the BRCC, is a British solicitor and a member of the Bucharest Bar, being managing partner of McGregor & Partners, Bucharest & Sofia, in addition to being a director of Purcari Wineries. He was first elected as a director of the BRCC in 2014, following the legal work done by his firm to accredit the BRCC to receive UK Government funding to promote trade links between the UK and Romania.

In addition to his legal practice as a business lawyer, Neil chairs the Nomination, Remuneration & Corporate Governance Committee and serves on the Audit Committee in his non-executive role on the Board of Purcari Wineries, a company whose shares are listed in the main index of the Bucharest Stock Exchange. Neil is one of the founding committee members of the Bucharest Caledonian Ball which supports the work of the guide dogs for the blind charity Light into Europe and will be master of ceremonies at the 21st edition of the Ball at the Intercontinental Hotel in Bucharest on 17 November 2108. Neil’s other charitable and voluntary work is carried out in both the UK and in Romania, including 24 years as the company secretary of the Nene Valley Railway, a charity which operates a preserved heritage railway in Cambridgeshire, and supporting the Romanian association “Prietenii Mocanitei” which is working to preserve and re-open the Sibiu – Agnita narrow gauge railway, which is a historic monument in Transilvania. Neil has lived in Bucharest since 1996 and is married to Boni (a Romanian lawyer and a partner in McGregor & Partners); they have a ten-year old daughter.

“I am delighted to have been elected as the new Chairman of the BRCC in Romania’s centenary year. The BRCC has developed successfully under my predecessor, Colin Lovering and I am pleased that I will be supported by Colin and by Dan Kearvell as my two vice-chairmen, in addition to the other members of the Board of the Chamber. We however now face a challenge in that the UK is to leave the EU on 29 March next year, with all of the uncertainties and opportunities that will bring. The BRCC is a non-political business association, which is run by its members, for its members, Romanian, British or otherwise. Members, although in different businesses, often face similar challenges and one member’s experience can help another member. Most importantly, the Chamber allows the business community – in the UK and in Romania – to present their views to the governments in the UK and in Romania. Business and investment will not stop – and indeed cannot stop – on 29 March 2019. I believe that my background in law and in business will help to develop the BRCC’s relationships with the Embassies in London and in Bucharest and the respective governmental authorities. The BRCC must continue to ensure that businesses – and the people who do business – are able to exploit the opportunities which the UK’s departure from the EU will bring, as well as mitigating any less-welcome effects of this.”