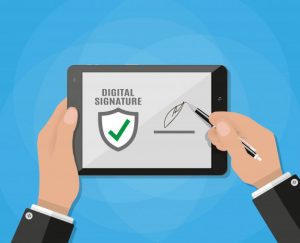 The Decree of the Romanian President 195 of 16 March 2020 regarding the state of emergency in Romania imposed various measures, including the limitation of the public’s access in the spaces of the public authorities as well as the use of the electronic means of communication with them.

What is the electronic signature?

Two (2) typyesof electronic signature are being stipulated by Law 455, namely:

What is the legal regime of the documents bearing an electronic signature ?

Leaving aside the rules of the social distancing which have been imposed by Covid-19 pandemic, are there incontestable advantages for the use of electronic signature?

Any document must be printed before affixing the holographing signature.  Bearing in mind the bureacracy and the commercial relations, there is sometimes the need to print a big volume of documents which implies the consumption of various equipment and assets (toner, paper, printer), as well as the time required for printing and signing them.  Sometimes, such documents must be sent by courier, which implies other costs (time and courier charges).  The electronic signature allows the quick signature of a big number of documents and sending them to the receiving party at once.

We know that in European Union, a qualified electronic signature obtained in a member state is recognised as such in all other member states.

More than that, by enhancing an increased degree of security, the electronic signature is a guarantee both for foreign business partners and for foreign gouvernments.

Until 15 May 2020, when the emergency state ceases, it is obvious that the contact with various authorities will be done through electronic signature.  It is not clear either how the restrictions will be relaxed, or how the social interaction will look like (not only with the authorites, but also with the business partners).  It is obvious that the rules regarding the social interaction will be maintained at a certain level, while the business environment will change.  As such, considering the advantages of an electronic signature, we believe that it is recommended for it to be used even more by the business environment.